The Teatro dell’Opera di Roma was born as “Teatro Costanzi”. Born in Nocera Umbra in 1819 and died in Rome in 1898, Domenico Costanzi was one of the most important entrepreneurs of the era in which Rome, completed the unity of the Italian peninsula, including the islands, was preparing to become its capital. Arrived in Rome in the year of the Breccia di Porta Pia, 1870, he built and managed large hotels still active today in Rome.

The great enterprise of his life, from the cultural point of view and not from the economic one, was the realization of the current Teatro dell’Opera di Roma, an investment that cost the Costanzi almost two million of the current euro. The work, located in the current Piazza Beniamino Gigli, near Piazza della Repubblica, was built between 1874 and 1880 in the Neo-Renaissance style. The Costanzi family retained its management until 1926, when it was bought by the Municipality of Rome. 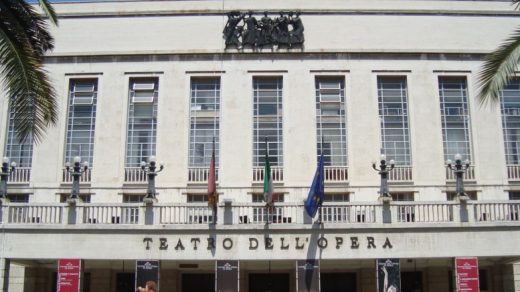 Afterwards, the structure was assumed the name of “Teatro Reale dell’Opera”, it was enlarged and inside it placed a magnificent crystal chandelier, which is periodically subjected to maintenance operations, so much is precious. The works were entrusted to the architect Marcello Piacentini. The new inauguration took place in 1928.

After the war, the “real” epithet was eliminated. In 1956 the theater was again enlarged and restored. The works were again entrusted to Piacentini. In the following four years the structure was equipped with a staircase of honor and a foyer of the boxes. In addition, premises for offices, purchased and new furnishings were created. I change also the façade and the reconstruction of the facade in the style of the twentieth century. Today the Teatro dell’Opera di Roma has a capacity of 1,400 seats compared to 1,100 when it was inaugurated, and is directed by Carlo Fuortes.