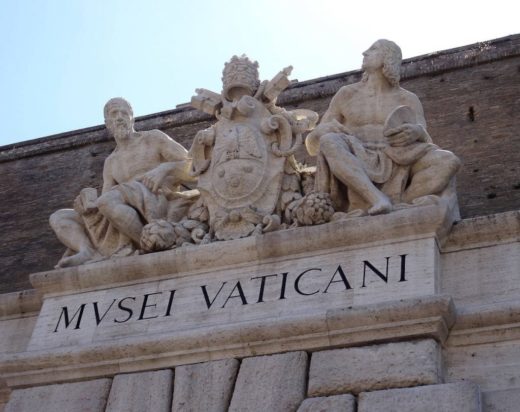 In the ambulatory above the walls there are mosaics: ornamental strips and octagons with theatrical figures that make up a floor from the II-III century and busts of divinities, and Greek philosophers of the Roman age.

In the passage to the vestibule of the portico we find a bronze bust of Pius XI by Quattrini and a monumental inscription commemorating the new entrance.

In the vestibule of the portico, in a niche in front of the door, there is perhaps the head of Giulia Domna, wife of Septimius Severus with an inscription, probably from a quarry, engraved under the neck. On the walls, busts of the Roman age and mosaics: on the sides of the door leading to the portico two large ornamental mosaics from the 2nd century. Leaving the portico of the Pinacoteca on the left, you go towards the Quattro Cancelli, the ancient entrance to the Sculpture Museums. From the atrium of the Quattro Cancelli, decorated with statues and busts, you pass into the vestibule of the Simonetti Staircase where there are statues of a young Roman and a barbarian prisoner in two niches, from where you enter the Profane Museum of the Library on the right and, on the left , go up this staircase and arrive at the other staircase called the Greek Cross which is the first of the Sculpture Museums.

The entrance to the Vatican Museums is a few minutes walk from the bed and breakfast rome center called The Center of Rome.