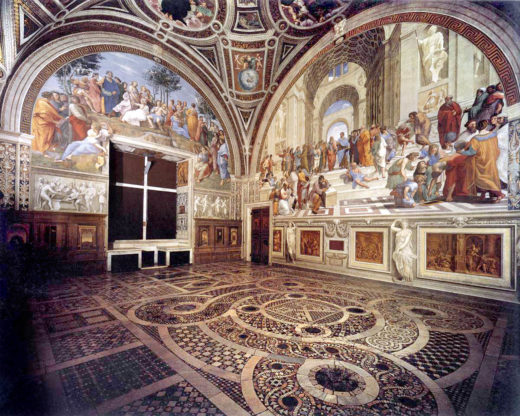 Around 1508 Julius II entrusted Raphael, then twenty-five years old, with the pictorial decoration of the so-called Rooms, which are part of the palace of Niccolò V, various painters from the 15th century (including Piero della Francesca) had worked there, and others ( including Perugino, Sodoma, Peruzzi and Lotto) still painted there today. Their works were destroyed by order of the pope, with few exceptions.

It is the last to bear the name of Raphael. In the execution there is little of him, since in those years, overwhelmed by work, he contented himself with providing drawings or cartoons to the students (especially Penni and Giulio Romano), for the execution in fresco.

The decoration program is the exaltation of the papacy, in two great and holy pontiffs named Leo, the III and the IV, both Romans, who died respectively in 816 and 855.

The Fire of the Borgo (plate XXIII) (on the wall in front of the main window) illustrates an episode from the “Liber pontificalis”: Leo IV, with a sign of the cross, would have put out a violent fire that developed in Borgo Santo Spirito. At the bottom you can see the facade of the ancient basilica

of San Pietro (whose demolition was begun by order of Julius II), and part of the Vatican palace. This painting is the only one in the room where, in some details, one could recognize the brush of Urbino. The group of Aeneas and Anchises and, on the right, the famous water bearer are beautiful and much imitated.

The Battle of Ostia, or naval victory of Leo IV against the Saracens near Ostia (to the left of the previous fresco), is a smoky painting, but not without quality, in which the hand of Giulio Romano can be recognized. Enthroned Leo IV, in the guise of Leo X; next to him Cardinal de ‘Medici and Bibbiena. The episode alludes to the repression of Saracen piracy on the Lazio coast, vigorously conducted by the Medici pope. In the background the Rocca di Ostia.

The Justification of Leo III (lunette above the main window) took place on 23 December 800, when this pope, in the basilica of San Pietro, spontaneously justified himself by false accusations; “He belongs to God, not to men to judge bishops,” says the inscription. Very mediocre painting.

The Coronation of Charlemagne is to the right of the Iticendio. Raphael, giving Pope Leo III the features of Leo X and the emperor those of Francis I, alludes to the 1515 consortium between the Church and France. Execution of the Sanzio school and especially, it seems, of Raffacllino del Colle.

The paintings on the vault (Glorification of the Holy Trinity) are by Perugino; Raphael respected them, they say, in homage to his old teacher.

The Bed and Breakfast at the center of Rome named The Center of Rome B&B is close to the Raffaello’s Rooms of the Vatican Museums.